No Need for Running on Fumes

In the late 1960’s the focus of Reston seems to have changed to #2 Highway from the railway. The Peanut had its last run in 1961 and citizens were much more mobile than in generations that came earlier.  Reston House owner and community supporters Ed and Rita Gulas decided to build a hotel on the highway and add a service station to the east as well. The official opening of the Reston Esso Station and the Reston Motor Hotel was held in February of 1966.  Reeve Carl Wedow cut the ribbon and Father Currie of Souris dedicated the structures. Ed later operated it as a Texaco station and had bulk plant with Ed as well as his son Greg driving the fuel truck until 1970. The garage did oil changes and sold tires.  I found the following article in a December 1971 Brandon Sun that details the taxidermy that graced its walls.  Sounds like an interesting place that I'm sure sticks in the memory of some of my readers! 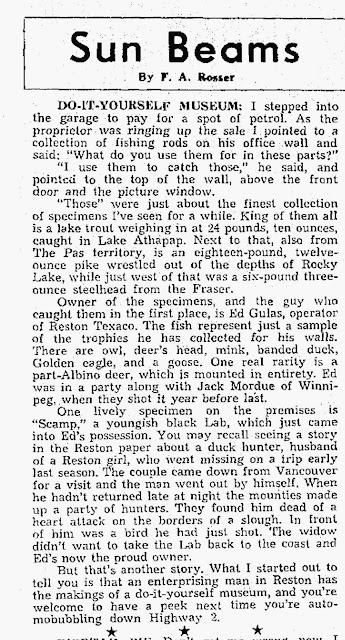 Gary and Barbara Watt were next to own the shop beginning in 1977 and continuing for the next 30 years. Being a licensed mechanic, Gary operated a general repair shop and sold Texaco gas.  Over the years he was a dealer for different fuel companies including Gulf and Co-op and he operated a CAA Roadside Service and did towing. It was a family affair with Gary’s dad Alex involved at the beginning and his children Marc and Ashli working there as well.  Several young men worked and learned with the Watts before going into mechanics for themselves.  Gary and Barb looked after Randy and I well for the years we were driving many miles in opposite directions to work when we were first married. I for one seemed to flirt with driving on fumes as long as I could.  I still remember his good-natured chuckle with me when I ran out of gas with a list of Things To Do on the dashboard that began with "Get Gas". They sold the business in 2007 and it became the home of Caldwell Customs for a while. It is not used now but the building is well maintained and remains as a welcome to Reston for highway travelers and residents alike.