The Smell of Fresh Bread

Fresh bread just out of the oven - what an unmistakable smell! Reston’s first bakery was in a small brick building between the grocery store and drugstore on Main Street in the early days of the town. With the population boom in 1906 due to a branch railway line being built to Wolseley, Munro moved the bakery to the Wilcox building, just south of the store as shown at the far left side in the clipping above. It would have been a busy spot with the bakery as well as an ice cream parlour, selling product made from local ingredients made in the basement. Barber services were also found in this building.  Joshua Kines Robertson was the head baker for many years until the unfortunate fire in 1934 when the building was destroyed and there was no local bakery for many years after that. Mr. Robertson then became the foreman in charge of the electric light plant and branched out into electrical repair as well.  He and his wife, the former Elizabeth "Lizzie" Bulloch, had two sons.  One of these, William Alan was killed in his role as an air gunner in 1942. 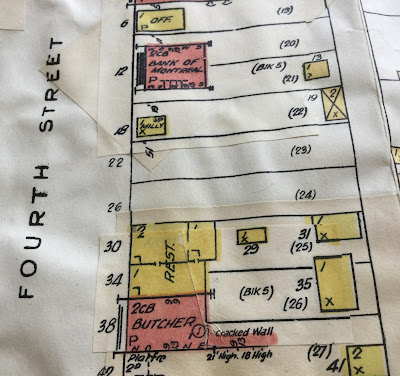 The Western Canada Fire Underwriters Map above from 1928 indicates the Butcher and Bank on Fourth Street are made of brick by the pink colour. The Restaurant is yellow, showing a wood frame construction.  The building had been rebuilt after the 1916 fire by A.E. Smith just to the north of his brick Meat Market. This restaurant was the home of the Canada Cafe owned first by George and Jim Soon and later the Sing family. George immigrated from China in 1907, according to the census from 1921. The cafe closed in the early 1940’s and apparently sat empty until the Lamonds moved to town.
Pete Lamond worked for A.E. Smith for a time at the Reston Meat Market until he decided to open his own business - Pete's Meat Market in the former Canada Cafe building.  Baking made an appearance in the 1960’s when Bernice Lamond began selling in her home baking in the shop . They lived in the second floor over the shop and left in 1968.

In July of 1968, Jack and Edith (Flannery) Russell opened Russell’s bakery and it was a real family affair with their 2 sons and 2 daughters taking active roles in the business over the years. Faithful blog reader and carpenter Brian, remembers helping put in a cement floor to accommodate a large bake oven with Francis Giles and removing the top storey. Son John Russell took over the business in 1978 and next to own it were Larry and Patricia Wright in 1985. In 1993, a partnership of the Williamson’s and the Davis’s were next until 1998 when Vera and Terry Abrams ran the bakery. Brent Reid was next from 1999 to 2004 along with his catering and landscaping businesses. Doughnuts from Brent’s were a popular treat along with other baked goods, bread and buns. It was a sad day when Reston Bakery closed on December 31, 2004 and was later torn down in to make way for Tycoles Insurance - Four Corner Associates now Andrews Agencies moving in their building on Main Street.

All is not lost however. Murray Anderson carries the baked goods of a few local bakeries as well as McGavins breads on the shelves of his  Reston Fine Foods.  Patti Cakes Gourmet Foods owners, Bob and Connie McQuiston have brought back the smell of fresh baking to the downtown streets during their seasonal business.